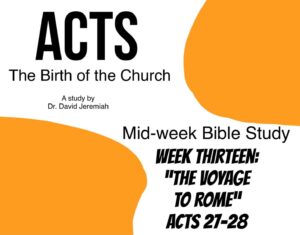 After testifying before Roman governors and Jewish kings, Paul was escorted to Rome by a Roman centurion named Julius. On the way, Paul survived a storm and a shipwreck. Then, on Malta, he was bitten by a poisonous viper. Paul healed the sick on Malta, and eventually preached to the Jews in Rome.

What advice did Paul give the centurion concerning the voyage? What did Julius ultimately do? Why? (See Acts 27:9-11.)

After leaving the port of Phoenix located on the island of Crete, they ran into a severe storm. What advise did Paul give in verses 21-26?
What ultimately happened to the passengers in verses 39-41?

What happened to Paul on Malta? What did the natives first think? What changed their minds about Paul? How did they consider him? (See Acts 28:3-6 for the answers to these questions.)

They stayed in a neighborhood near Publius, who was a leading citizen. In verses 7-10, what was wrong with Publius’ father? What did Paul do? What happened as a result of Paul’s actions?

Once safely in Rome with his guard, what did Paul do to share the Gospel in Rome? (See verses 21-23.)

REFLECTING ON THE MEANING

Paul faced danger in many ways, and his life was put in danger at various times. Nevertheless, he continued to present Jesus to all he encountered. We may face many storms in our lives, but we should be encouraged to present the Gospel whenever we can.