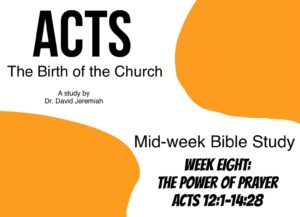 Today’s lesson begins with the church under persecution from Herod. James, the brother of John, has already been killed. (Acts 12:2) Peter had been taken and put in prison. How did the church address this situation according to Acts 12:5? Think of some situations in your life where you’ve witnessed the power of prayer. 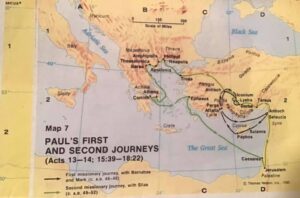 Today’s lesson shows the power of prayer in several areas…
Chapter 12 — Peter was rescued from prison by an angel, because of the prayers of the church.
Chapter 13 — The Holy Spirit spoke to the believers. What instructions did the Spirit give to the early church? In Acts 13:46, how did Paul explain to the Jewish people, in Antioch of Pisidia, his reasoning for sharing the Gospel with the Gentiles?
Chapter 14 — Paul and Barnabas healed a crippled man. They were idolized and given sacrifices, but corrected the crowd’s idolatry. In Acts 14:19, what happened to Paul when the Jews from Antioch in Pisidia and Iconium arrive in the town of Lystra?

APPLYING THE MESSAGE & REFLECTING ON THE MEANING

Thank you for joining, We’ll be studying Acts 15 & 16 next week — The Church in Conflict.
— Pastor John

1 thought on “The Power of Prayer”