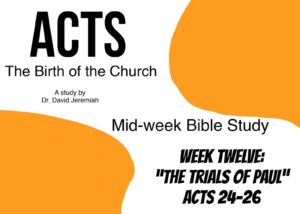 Paul had evangelized the lost and confronted false religions he encountered in his travels. He had founded churches and reached out to the Gentiles. He had discipled and mentored faithful servants in the task of spreading the Gospel. Yet, these efforts only stirred up hatred and opposition from enemies of the Gospel.

In today’s lesson, we look at Paul’s journey through Jewish and Roman legal systems. Some might think that these court appearances were a disruption of Paul’s work, however, Paul viewed these appearances as a chance to present the Gospel to all his judges. In the end, Felix and Agrippa were almost persuaded to become Christians…but, valued their power too much.

What all did the lawyer, Tertullus, accuse Paul of doing? (Acts 24:4-6)
According to verse 9, how did the Jewish witnesses react?

What defense does Paul make for his actions in verses 12-16? Felix had lived with the Jews in Palestine for over a decade…he knew Paul was innocent. How did he attempt to delay the situation?

A new governor, Festus, came to the province. In Acts 25, the Jews asked Festus for a favor. What was the intention of the Jews? How did Festus deal with the situation? (Acts 25:2-5)

In verses 10-12 of Acts 25, what did Paul understand about returning to Jerusalem? Consider his reasoning for appealing to Caesar.

While awaiting to go to Rome for trial, Paul appeared before King Agrippa and his wife, Bernice. Describe Paul’s defense made before the king in Acts 26:19-23. In verses 28-32, consider Paul’s intent, or motive, for speaking before the king. How did the king respond to Paul’s testimony?
In verse 32, Agrippa and Festus declared Paul innocent. Why couldn’t they set him free?

In your experience, what do you find keeps people from accepting Christ after they’ve heard the Gospel? Think of how we might overcome those obstacles when sharing our faith in Christ.

We have no guarantee of tomorrow…and we don’t know when, or how, the Holy Spirit may speak to an individual. God’s Word gives you a message of urgency to share with the lost and dying world.