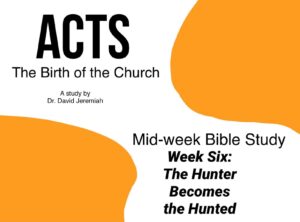 We have previously seen Saul approving of the stoning of Stephen. Acts 9:1 says that he is still threatening murder and imprisonment to believers. In Acts 9:3, his life drastically changes.

“Perhaps it was fitting that Saul should experience such a unique conversion...for he was a unique person. He was a Jew by birth, a Roman by citizenship, a Greek by education, and a Christian by grace. Missionary and theologian, evangelist and pastor, organizer and leader, thinker and statesman — the many sided man who later became known as Paul the apostle, has influence that continues to this day to reach wide and deep.” — David Jeremiah

How do Saul’s actions in Acts 9:1-2 reveal the threat to Judaism that he considered the early Christians? Describe the immediate physical results of Saul’s encounter with Jesus in verses 8 and 9. How did God instruct Ananias in a vision? Why was he reluctant to see Saul of Tarsus? (Acts 9:11-14). What specific information does God reveal to Ananias about Saul’s importance? (Verse 15) Why did God use such drastic measures in Saul’s encounter on the Damascus Road?

What happened in Damascus that caused Saul to hastily leave in verses 22-25? (See also Galatians 1:17-24.) What problems did Saul encounter with the Hellenists in the city? (Acts 9:26-30)

Peter was also busy doing the Lord’s work in other places. What effect did Peter’s healing of Aeneas have on the people in Lydda, and on the spread of the Gospel? (Verses 34-35) In Joppa, ten miles northwest of Lydda, Peter performed another miracle. What effect did the raising of Tabitha have in spreading the good news of Christ? (Verses 37; 40-42)

How did Jesus introduce himself to Saul on the Damascus Road? (Acts 9:4-5).

What did Ananias say to Saul when he found him? What happened when he prayed for Saul? (Acts 9:17-18)

What effect did Saul’s conversion and ministry have on the early church? (Acts 9:31)

Also, what effect did God’s miracles, worked through Peter, have in the cities of Lydda and Joppa? (Acts 9:42)

What do the stories of Saul, the persecutor...and Peter, the denier...tell us about who and how God uses people for His honor and glory?

Think about this when you’re tempted to write off someone as “too far gone” or “unfit” for the Lord’s service.

REFLECTING ON THE MEANING

These stories reveal the transforming power that Jesus can make in a life.
They also show us that God uses busy people to grow His kingdom.

The best way to find God’s will for your life is to “busy” yourself doing what God has already revealed to you.

Ask yourself...What does God want me to do today?