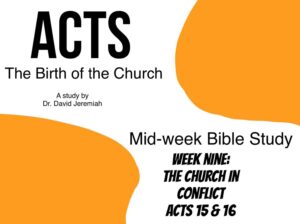 Throughout church history, there have been many councils to decide on issues related to church doctrine. Paul and Barnabas were aware of a problem which had arisen in the early church. They went to Jerusalem to deal with the situation that had arisen. Situations still arise in the church that need to be resolved with a Christ-like attitude.

What situations have you witnessed, or dealt with, in your church experience?

In Acts 15:1-2, what was the problem that certain Jews were causing? How did Paul and Barnabas deal with the situation? In verses 6-11, what did Peter say about this matter? How did the council resolve the question?

As Paul prepared to leave, he chose Silas as his new companion. (See Acts 15:27; 32) When they arrived at Derbe and Lystra, they met a well respected young disciple, Timothy. He had a Jewish mother, but a Greek father. They asked Timothy to be circumcised before traveling with them. Considering all Paul had gone through at the Jerusalem Council, why was it important for Timothy to be circumcised? (See Acts 16:1-3) Referring to verses 6-9, explain why Paul and Silas went to Macedonia. Why didn’t they go to Asia? (See Verses 6-7)

Describe how the apostles met Lydia and her family. (Acts 16:13-15) What happened with her family? Why is this important?

Paul and Silas then encountered a demon possessed slave girl. After she followed them for several days, what did Paul eventually do? (See Verses 17-18) Why did this anger her owners. (See Verses 19-20)

In Acts 15:1 and 15:5, what issue needed to be resolved in the early church? Try to think of a current issue which might cause discord in today’s church.

In Acts 16:5, what results do we see from Paul, Silas, and Timothy’s missionary work?

Why were the masters of the demonic slave girl so angry with Paul for casting out her demon? (See Acts 16:19)

In dealing with new believers in Jerusalem, Derbe, Lystra, and Philippi, the apostles repeatedly stressed one thing which was necessary for salvation. (See Acts 15:11; Acts 16:14; Acts 16:31) If a friend asks what he or she needed to do to be saved, how would you respond?

Thank you for taking part in this study. We’ll be studying from Acts 17-20 next week — “A COURAGEOUS LIFE”.