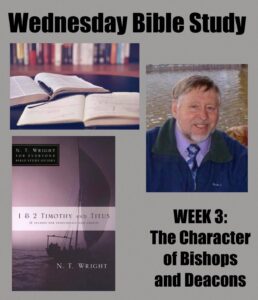 What standards does Paul recommend to Timothy in verses 2-6 and 8-12?

People outside of the church often judge Christianity. Think of some Christian televangelists, and others, who have fallen. How do their negative examples, and bad behavior, reflect on the church?

So far, Paul has addressed standards for Christian leaders...but, in reality, should all believers be living up to these standards?

In verse 15, what three ways does Paul refer to the church?

Christian leaders should lead by example, but all believers need to exhibit high character and morals. Follow Jesus’ example.

Paul speaks in verse 16 of the mystery of godliness. Many first century religions spoke of mystery.

“The Christian ‘Religion’ was different. It was a mystery, but one revealed to everyone. It was the fulfillment of the promises made by the One True God to Israel. Ponder verse 16. What do you understand of the mystery of godliness on this earth?” - N. T. Wright

As you look through the whole chapter, what impresses you about the way you should behave in God’s household?

Pray for the leaders of your church, that they would exhibit high character. Then, ask the Lord to do the same for you.