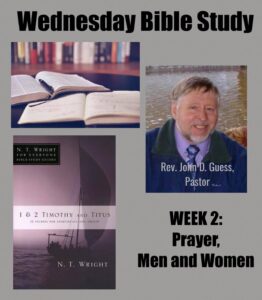 As the title suggests, 1 Timothy 2 is concerned with two subjects:
Prayer - and Teaching & Leadership among men and women in the church.

N. T. Wright suggests that we think about whom we pray for, and place on our prayer list. Normally, we start with those closest to us. In verses 1 and 2, for whom does Paul tell us we should pray? Why?

Our world is far different than the first century Roman Empire. But, why is it still important to pray for our local and national leaders?

“As happens so often in the New Testament, the call to prayer is also the call to think clearly about God and the world, and God’s project for the human race.”
- N. T. Wright

Paul suggests to his readers, and to us, that we should pray for our leaders. As we pray, our attitude will grow and mature.

Paul shifts gears in verse 8 to speak about men and women’s relationship in the church. These verses can be difficult and explosive without context.

What does Paul say in verses 8-11 about how women should be noticed in the church?

Paul was not excluding women from teaching, or leadership positions. In context, Paul was writing to Timothy in Ephesus, where there was a female only cult to Artemis, or Diana as the Romans called her, in which all the priests were women.

N. T. Wright explains Paul’s writings...”While many whom I respect disagree about what these verses mean, and how they should be applied, I believe the apostle was saying that on the one hand, women should be trained and educated in the faith (in contrast to much of the Roman Empire), but that on the other hand Christianity should not become a cult like that of Artemis in Ephesus, where women did the leading and kept men in line. Men should not lord it over women, nor women over men.”

What are the advantages of a body of believers where both men and women are encouraged to develop whatever gifts God has given them?

How might Christians today live in contrast to the standard images of male and female in our present world?

We should pray that God gives us understanding in the two truths in this chapter.