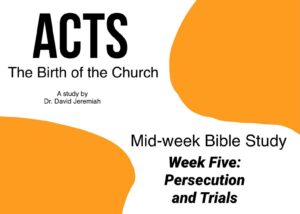 Stephen was one of seven chosen as a deacon, and was also preaching the Gospel. After disagreements with the Synagogue of Freedmen, they induced people to lie about him and accused him of blasphemy.

Stephen, rather than defending himself, began a lengthy defense of the Christian faith. Playing to a highly Jewish audience, he traced the history of Israel from Abraham to Moses in the first thirty-six verses of chapter 7.

How does Stephen draw on Moses in the wilderness to show Jesus as the Jewish Messiah? (Acts 7:37-40). What does Stephen finally accuse the Jewish leaders of? How does he describe them? (Acts 7:51-53)
In verses 54-60, scripture says that Jewish leaders began gnashing their teeth. In their anger, they drove Stephen out of the city and stoned him. What did Stephen see as he was dying? (Acts 7:54-57). What did he asked of God in verse 59. How does this compare to Jesus on the cross in Luke 23:44?
Paul was there at Stephen’s death...and approved. What else do we find out about Paul in Acts 8:1-3?
Philip was another of the seven men of good reputation. Where was he preaching? What was the result of his ministry? (Acts 8:5-8). What part did Philip play in spreading the Gospel message? (Acts 8:26-29). How did Philip explain the Gospel to the Ethiopian eunuch (Acts 8:30-35)? What is the significance of Isaiah 53:7, which the eunuch was reading?

“Stephen used his trial before the Jewish leaders to deliver a sermon which traced the redemptive work of Jesus through the Old Testament. They became very angry, and eventually killed Stephen.” — David Jeremiah

How did Philip help the Ethiopian official see that Jesus was the promised Messiah? (Acts 8:30-35)

How have you seen God use trials and challenges to further the work of His kingdom?

Reflecting on the Meaning

“The stories of Stephen and Philip help us to understand that God has called us to a courageous faith. Our courage comes from our conviction...and our conviction comes from the Word of God. If we fix our hearts on God’s Word, we will get conviction. When we get conviction, God will give us courage. When we have courage, we will do even the hard things that come our way for the sake of Hid kingdom.” — David Jeremiah

We will be studying Acts chapter 9 next week. Thank you for joining in this study.