Wednesday Bible Study - March 25, 2020
This evening we continue our study of “Jesus: Understanding His Death and Resurrection” - written by Kay Arthur & David Arthur

THE LAST PASSOVER & THE MOUNT OF OLIVES 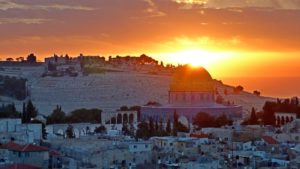 After Jesus and the disciples had observed the Last Passover, they went out to the Mount of Olives. In Mark 14:27, Jesus speaks very important information to the disciples.

Think about Peter’s confrontation with the Lord (Mark 14:29-31) and notice who was refuting Jesus. Would we have felt the same way? 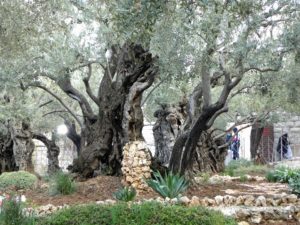 Jesus went away to pray three times. What did He ask of the Father each time? How did Jesus find the disciples each time he returned to them? Jesus submitted to the will of the Father, and yet, the disciples were unable to keep watch. Think about our willingness to submit to the Lord’s will and our ability to remain submissive.

“Hematidrosis” is a Greek word composed of two roots, both found in Luke 22:44: “His sweat (idros) became like drops of blood (aima). Hematidrosis is the process or action (-sis) of sweating blood. The rare condition of sweating blood through the pores of various places in the body can be triggered by intense stress like the immediate threat of death.

If Jesus loved us so much that He was willing to obey His Father, even unto death, how far will we go in obeying our a Lord and Savior, Jesus Christ?

26 And when they had sung a hymn, they went out to the Mount of Olives. 27 And Jesus said to them, “You will all fall away, for it is written, ‘I will strike the shepherd, and the sheep will be scattered.’ 28 But after I am raised up, I will go before you to Galilee.” 29 Peter said to him, “Even though they all fall away, I will not.” 30 And Jesus said to him, “Truly, I tell you, this very night, before the rooster crows twice, you will deny me three times.” 31 But he said emphatically, “If I must die with you, I will not deny you.” And they all said the same.

32 And they went to a place called Gethsemane. And he said to his disciples, “Sit here while I pray.” 33 And he took with him Peter and James and John, and began to be greatly distressed and troubled. 34 And he said to them, “My soul is very sorrowful, even to death. Remain here and watch.” 35 And going a little farther, he fell on the ground and prayed that, if it were possible, the hour might pass from him. 36 And he said, “Abba, Father, all things are possible for you. Remove this cup from me. Yet not what I will, but what you will.” 37 And he came and found them sleeping, and he said to Peter, “Simon, are you asleep? Could you not watch one hour? 38 Watch and pray that you may not enter into temptation. The spirit indeed is willing, but the flesh is weak.” 39 And again he went away and prayed, saying the same words. 40 And again he came and found them sleeping, for their eyes were very heavy, and they did not know what to answer him. 41 And he came the third time and said to them, “Are you still sleeping and taking your rest? It is enough; the hour has come. The Son of Man is betrayed into the hands of sinners. 42 Rise, let us be going; see, my betrayer is at hand.”

7 “Awake, O sword, against my shepherd,
against the man who stands next to me,”
declares the Lord of hosts.
“Strike the shepherd, and the sheep will be scattered;
I will turn my hand against the little ones.

41 And he withdrew from them about a stone's throw, and knelt down and prayed, 42 saying, “Father, if you are willing, remove this cup from me. Nevertheless, not my will, but yours, be done.” 43 And there appeared to him an angel from heaven, strengthening him. 44 And being in agony he prayed more earnestly; and his sweat became like great drops of blood falling down to the ground.45 And when he rose from prayer, he came to the disciples and found them sleeping for sorrow, 46 and he said to them, “Why are you sleeping? Rise and pray that you may not enter into temptation.”