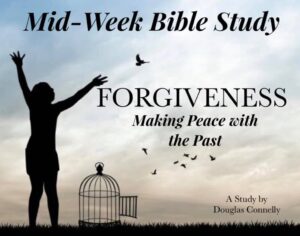 The book of Philemon is rather unique. It is one chapter with very little background.
The idea of slavery is completely unacceptable in our time, but was totally acceptable, and very prevalent, in the First Century Roman Empire. Onesimus was a runaway slave, who had perhaps stolen from Philemon when he ran away. At the time when Paul wrote this letter, Philemon was a believer. Onesimus had encountered Paul, and had accepted Jesus as Savior….he had also become very helpful to Paul. Paul considered Onesimus a spiritual son.
In the scripture lesson, we see Paul writing a letter to Philemon on behalf of Onesimus, in order to ask for forgiveness.
Paul doesn’t command Philemon to forgive Onesimus…rather in verses 8, 14, and 17, you will find a different basis for asking forgiveness.
Is there someone in your life Paul would ask you to forgive? Think about who and why.
Why would Philemon be justified in rejecting Paul’s request for Onesimus?
What risk would Onesimus take by going back to Philemon?
In verses 18-19, Paul asked to charge Onesimus’ debt to Paul’s account. Compare this to Jesus taking on our debt on the cross.
What insight and understanding does this story show you about forgiving someone who has wronged you?
Consider how this story of forgiveness and restoration relates to our forgiveness and acceptance by our Heavenly Father.
Ask the Lord to give you a heart to forgive those who have hurt you most deeply.
“An early church writer hints that there’s more to this story than Paul’s letter reveals. About 40 years after Philemon was written, a church leader named Ignatious wrote a letter in which he greets the bishop of the region of Ephesus…a man named Onesimus. It’s possible that in time, Philemon freed Onesimus, and he eventually became the leading pastor in the region around Ephesus. Quite an accomplishment for a runaway slave!” — Douglas Connelly
Thank you for joining in this study. Please let me know if you have any questions.
— Pastor John