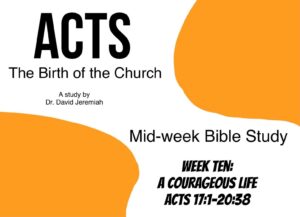 The four chapters describe continued events in the life of Paul. He truly lived a courageous life with the intent of spreading the Gospel of Jesus Christ. He faced criticism, and sometimes, persecution. Think about what criticisms you have faced, because of your Christian faith. How have you responded?

When Paul arrived in Thessalonica, he followed his pattern of preaching in a Jewish synagogue. In Acts 17:2-5, consider the various responses Paul received. In verses 17:10-13, what was different about the Bereans? What ultimately caused trouble for them in Berea?

Paul was in Athens awaiting Silas and Timothy. He didn’t initially preach, but began to present the message of Christ to the Jews and God fearing Gentiles…because of the great presence of idol worship. What attitude did the people have? (Acts 17:18-21) How did Paul ultimately engage the people According to verse 23, what did Paul notice and engage the locals about?

First Corinthians 2:3 tells us that Paul was in weakness and fear at Corinth. What happened in Acts 18:2-3 to cheer him up? What did he have in common with Aquila and Priscilla? What further boosted Paul’s spirits in verse 9? After staying in Corinth for eighteen months, why did Paul ultimately leave? (Acts 18:12-17)

In Acts 19, Paul eventually traveled to Ephesus. What was being accomplished in verses 11-13? What happened to the false exorcist in verses 14-16? According to verses 17-19, what positive outcome was a result of this event?

In Acts 17:4, what was noteworthy about Paul’s preaching? In Acts 17:21, how did Paul rouse the interest of the people of Athens?

In looking at Paul’s continued life and service, what do these chapters teach us about living the Christian life?

What does the story of the seven sons of Sceva teach us about false prophets and healers? (Acts 19:14-17)

Although we face disappointments and discouragement, we must remember that God supports us through the power of His Spirit.

Thank you for joining in this week’s study. We’ll be studying from Acts 21-23 next week. Please let me know if you have any questions.