The Table of the Lord

It’s Sunday.  We have gathered together and praised God and heard His Word.  Now we are ready to respond to what God has said to us.  We have opportunities to do this every week, but, on the first Sunday of the month, we have the awesome privilege to come to the Lord’s Table to share in Communion. 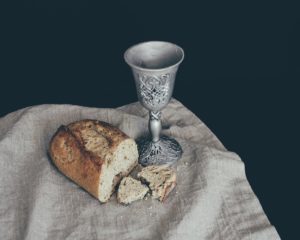 We know instinctively that this is a holy time, a special time.  We take it seriously, and yet I believe that we haven’t even begun to scratch the surface of what is meant by celebrating Communion.

There are four Biblical names for the Lord’s Table, each one expressing a different part of what happens in this important act of worship.  These are “the Breaking of Bread,” “the Lord’s Supper,” “Communion” and “Eucharist.”

The term “Breaking of Bread” has its roots in the story of Cleopas and his companion on the road to Emmaus right after the Resurrection (Luke 24.)  In this story the grieving pair meet a stranger on the road from Jerusalem.  As they travel, the stranger explains to them the meaning of all the events which had just occurred, and which were so hard for them to understand.  As they reach their journey’s end, they invite the man to stay with them for the night.  As they share the evening meal, t 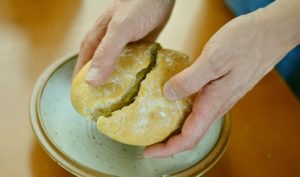 his unusual guest assumes the role of host, and takes the bread, gave thanks, broke it and gave it to them.  As He did this, their eyes were suddenly opened and they recognized the Risen Jesus in their midst.  They knew Him in the breaking of the bread.

In Acts 2:42 we have the first description of Christian worship.  “They devoted themselves to the apostles’ teaching and to the fellowship, to the breaking of bread and to prayer.”  The earliest phrase used for the Table is this one, the term that reminds us that the Risen Christ is indeed present with us.  He reveals Himself to us in some special way through the Breaking of the Bread.

The second term, “The Lord’s Supper,” comes from I Corinthians 11.  It’s now about AD 57, and the breaking of bread in the Agape feasts of the young Church has gotten out of hand.  Apparently people have been gorging themselves on the food and wine.  The wealthy have been getting drunk, and the poor have not had anything.  Paul rather sternly reminds the Corinthians that this is not right.  He suggests that they eat before they come, and he reminds them that the Supper is to remember the Lord’s death until He returns.  He takes them back to the night when Jesus instituted the Supper.  This passage includes “the Words of Institution” which are part of every service of the Table:  “The Lord Jesus, on the night when He was betrayed, took bread, and when He had given thanks, He broke it and said, ’this is my body, do this in remembrance of me,’” and the same Words of Institution about the Cup.

This passage also includes words about examining oneself.  Paul was trying to apply a corrective to those who were taking the Lord’s Table lightly. 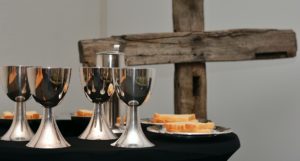 He was reminding them that Jesus really did die, and that it was a serious thing.  He also reminds them that Jesus will be returning.  This term reminds us to remember the death of Christ, and to look forward to His coming.

The third term, “Communion” comes from I Corinthians 10:16.  Paul says that the Cup of Blessing for which we give thanks is a  communion  or in some translations ,a participation, in the blood of Christ, and that the bread that we break is a communion or participation  in the body of Christ.  Many scholars believe that the reference here is to a covenant meal which people would eat and drink together to signify their participation in a covenant relationship.  Jesus said this was His blood of “the new covenant” (Luke 22:20), which seems to lend credence to this idea.  This would mean that, when we celebrate Communion, we are participating in a special way in a covenant meal with Jesus, that in some way we celebrate with Him and commune with Him in intimate relationship.  In doing this we celebrate His final victory over the powers of evil, because He is outside of time, and they are already defeated.  As we participate in the body and blood of Jesus, that victory is ours too.

The final term, “Eucharist,” comes from the Greek word for “to give thanks.”  In all the accounts of the Lord’s table, the phrases “give thanks” or “gave thanks” are used.  In I Corinthians 14:16 Paul tells the Corinthians to make sure they’re speaking their thanks in a known tongue so that others can say Amen to it.  He uses this word Eucharist for thanksgiving. When we use this term, we remember that Jesus gave thanks for the Bread and Cup, and we see our participation as a thanks offering to God for His great salvation. 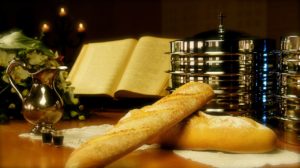 Different branches of the Church have emphasized different aspects of the Lord’s Table.  The fact is that each of these facets is found in Scripture.  Different ways of taking the Bread and the Cup have developed over time, based largely on what a group emphasizes.  Some churches go forward to receive.  Some sit in their seats.  Some stand around a table.  Some kneel.  Some use a large common cup to represent unity.  Some use small cups to represent the priesthood of all believers.  Some take the Bread and the Cup by intinction, dipping the bread in a common cup.